Dedicated to the enjoyment and preservation of the 6-Cylinder Honda CBX-1000 Motorcycle. Huge technical library!

Rob also provided some really valuable insight about fitting the fuel pump, filter, etc. into the tank on a bike with a saddle-shaped tank like the CBX. He used the setup from the early EFI Ducati Monsters before they went to a plastic tank. Hunting around a bit, I found that (perhaps unsurprisingly), the classic-look EFI Triumph bikes are similar. My plan is to go with the Ducati or Triumph parts and modify the bottom of the tank enough to include a large removable panel (like that Triumph setup) so that everything can be fitting from below so I can retain the twin-shock's distinctive gas cap, and keep the fuel pressure regulator and filter inside the tank.
Phil in Toronto
A cool guy deserves a cool bike, a dork needs a cool bike...
Pics of Perry, my '79.
Top

And just because I think it looks cool, here's the scan of one bank of carbs: 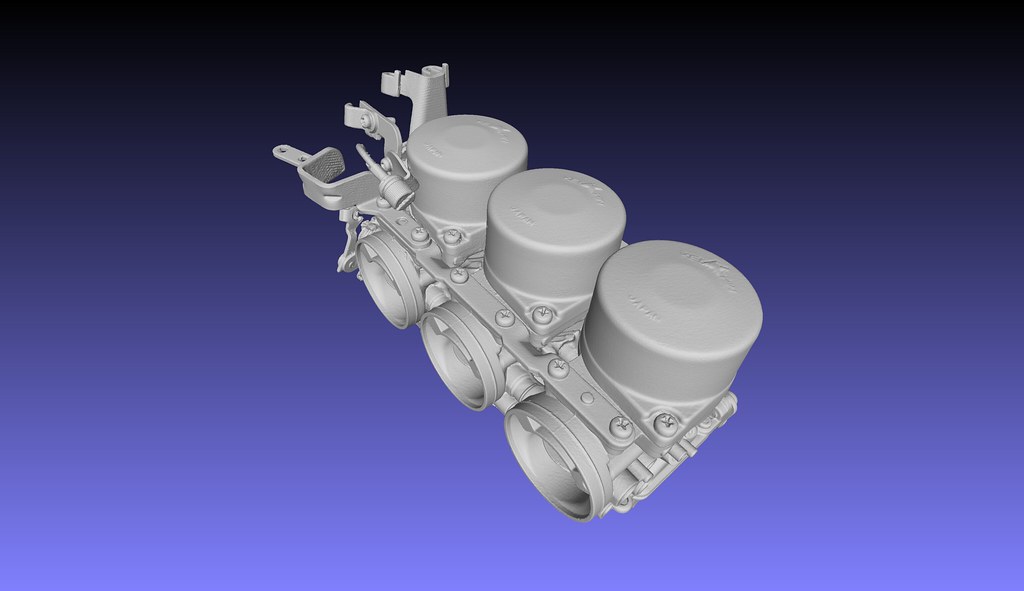 Phil in Toronto
A cool guy deserves a cool bike, a dork needs a cool bike...
Pics of Perry, my '79.
Top

I'm pretty intent on an internal pump and regulator (which will require significant tank modifications), but for others considering an EFI conversion and wanting to leave their tank stock, there's an OEM Honda option for an external pump with an integral regulator and sock-type filter - it works like a surge tank or swirl pot. I came across it today. There were units with the same external dimensions used for both the TRX ATVs and supposedly some larger cruisers. Here's a bit of info about the ATV one for those who are interested:

I wasn't able to find concrete info or part number for the version meant for bigger bikes, but maybe this lead is valuable for others who want to go that way.
Phil in Toronto
A cool guy deserves a cool bike, a dork needs a cool bike...
Pics of Perry, my '79.
Top

There's been some discussion here about ways of getting a cam phase signal for running sequential ignition. Fitting some kind of trigger wheel or other sensor to the cam presents numerous problems. I looked into adapting the technique from the Saturn Compression Sense Ignition which infers cam phase from the timing of signals on the two separate channels of a waste spark system - that would be good as it does not require any additional sensors under the cam cover, but the electronics of it are at least a bit tricky.

The builder of that crazy V12 308 Ferrari suggested I look at making a cam phase signal from the MAP#1 sensor, and that lead me eventually to this product:

It's a single module that takes the inputs from multiple MAP sensors (one from each ITB) and outputs the current strongest signal so that the ECU sees the output as a single MAP sensor like you'd have with a traditional plenum setup. I've seen other such solutions before and was already planning to use one (as documented in this thread).

HOWEVER, this one also sends a cam phase signal when MAP#1 is the strongest signal - so I no longer need to worry about fitting a degree wheel or hall effect sensor somewhere on my cam, and I also don't need to worry about that tricky compression sense ignition stuff.

I've contacted the seller and they say that the 6 and 8 cylinder versions are designed but not yet in production. Hopefully they're able to come through with a single off-the-shelf solution for these 2 problems.
Phil in Toronto
A cool guy deserves a cool bike, a dork needs a cool bike...
Pics of Perry, my '79.
Top

Picking up your timing signal from any source other than the crank induces a bit of variability because of the inherent slack/wear in the chains. Does it matter? Probably not.
Rick Pope
Either garage is too small or we have too many bikes. Or Momma's car needs to go outside.
Top

Timing signal still comes from the crank, but with only crank position, you can't tell if a given cyl is on its intake stroke or its power stroke.

The controller requires the exact engine rpm and the crank position to determine the appropriate fuel amount and the correct ignition point. To provide this, a gear was installed into the housing of the ignition pulser. This gear has a notch which sends the data to the controller via an inductive sensor
You do not have the required permissions to view the files attached to this post.
To be understood is the exception
To be misunderstood is the rule.
Top

EMS wrote: ↑
Wed Jan 12, 2022 3:10 pm
The controller requires the exact engine rpm and the crank position to determine the appropriate fuel amount and the correct ignition point. To provide this, a gear was installed into the housing of the ignition pulser. This gear has a notch which sends the data to the controller via an inductive sensor

Thanks for this. There are a few good examples of nice custom trigger wheels fitted to the CBX in place of the stock ignition signal generator. My plan is to go with something like the nice 36-1 wheel made by Mike Lynch. That should give the ECU excellent crank position information.

That would be enough to run waste spark ignition and batch or semi-sequential fuel. By adding a cam phase signal from the MAP sensor on cyl #1, the ECU will have enough info to run full sequential fuel injection. I will keep the waste spark system because I don't want to or see any need to run 6 separate coils. If I liked the looks of the coil-on-plug systems I would go that way, but I don't think it's right for this bike.
Phil in Toronto
A cool guy deserves a cool bike, a dork needs a cool bike...
Pics of Perry, my '79.
Top
Post Reply
83 posts