Dedicated to the enjoyment and preservation of the 6-Cylinder Honda CBX-1000 Motorcycle. Huge technical library!
https://www.cbxclub.com/forum/

cross wrote:Great info, thank you.
Is there really a need for 13 row cooler in Toronto?

It really depends on whom you ask, and when & how they ride.

First of all, you might be surprised at how hot a Toronto summer is - a fair bit hotter on average than San Diego according to the stats at WeatherSpark. 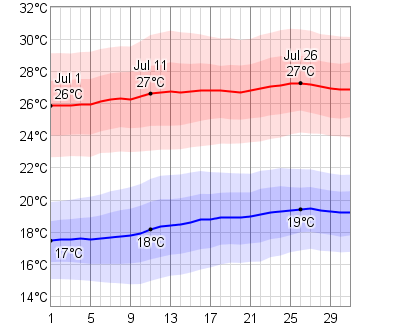 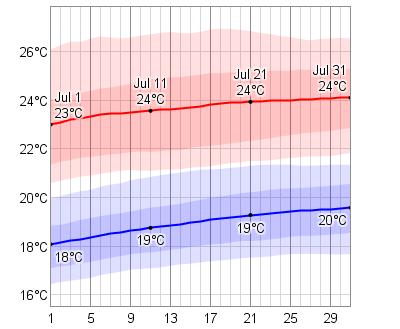 And every couple of years we get a pretty serious heat wave. So hot you can bake cookies in a parked car.

Of course, I am also known to ride into the southern US - NC/SC/TN/KY semi-regularly (REALLY wish I could make it to the rally this year!), and every now and then I'll visit my buddy in GA. I don't do that stuff in the head of midsummer, but I still don't want to plan my vacations/trips entirely around ambient temps.

Toronto also has some really brutal gridlock, both within the city (which is why I usually take the subway or bicycle when I can rather than the motorbike), and the surrounding highways. Highway 401 through Toronto (meaning about 60 miles east and west of the city) is the busiest highway in the world. Getting out of, into, or through the city can mean literally hours in stop & go traffic. Even in mild weather, that can send temps into scary territory. I once got an overheat warning on my liquid-cooled Duke 690 when I was trapped in traffic due to the Santa Clause Parade. Consider that.

Of course, the big cooler could definitely overcool the bike in the colder months, and I usually ride most of Nov and Apr at least. That's a big part of why I wanted the thermostat as well - and my heated vest and gloves are part of why I did the alternator upgrade.

For me, it makes sense - I wanted to do it once and be done with it, and have a bike that I can take (almost) anywhere I want, whenever I'm feeling tough enough to go there.

I had bikes running in the red temperature zone here in Ohio when caught in traffic jams on a freeway.

by Syscrush
I've had a few shakedown/test rides, including back & forth to the shop to have them sort out the gauges (tach is still noisy/bouncy), but yesterday was my longest ride yet - about 60k round-trip, with 3 stops. Impressions so far:
TODO:

by Syscrush
Tonight was the first time riding 2-up since the new front end and brakes went on. Did a mix of in-town and moderate highway speeds, and I remain quite pleased with how everything is working together (although it still needs some dialing in).

Jeff Bennetts wrote:Looks like everything is coming together nicely Phil, you have one of those builds that the more you see it the more the little details reveal themselves. What are your plans for the pipes and motor as far as the color scheme, black or silver?

Motor will stay silver. Pipes will be getting black ceramic coating sometime and I'll probably revisit the muffler mount at that same time. Other planned aesthetic changes are: covering exposed wires with chrome-look braided sleeve, and replacing those awful over-long red plug wires with braided stainless wires & black caps. I think I want to rework the front brake lines a bit, too. The key is that the bike is way more rideable now, so I'm OK with taking my time on those smaller things.


Congrats on the new baby on the way!

I agree the plug wires are too long but the red works with the red stripe in the paint.

by Syscrush
Yesterday my wife and I went for a short ride 2-up to go look at some furniture and enjoy the weather. 3 things became apparent:

1. She said she couldn't believe how much better the bike feels with the new front end - even as a passenger. Her bike is a Ducati Monster, so she's pretty attuned to bike handling.

2. A dude who knows more than average about bikes was checking it out for a while as we looked at furniture. He had left but when he saw us coming out carrying helmets, he doubled back to talk about the bike. He recognized the brakes and swingarm were not stock, but as I was going through the list of mods I realized "Hey, there's been a lot of work done on this thing!"

3. I really REALLY need to clean it. I was embarrassed as hell pointing out mods that had been made as the beautiful sunshine was illuminating dust and bird crap. My cover has been shipped, I'll do a good clean as soon as it arrives.

Syscrush wrote:
2. A dude who knows more than average about bikes was checking it out for a while as we looked at furniture. He had left but when he saw us coming out carrying helmets, he doubled back to talk about the bike. He recognized the brakes and swingarm were not stock, but as I was going through the list of mods I realized "Hey, there's been a lot of work done on this thing!"


yeah they become money pits very quicky, I was originally only planning to spend 5k but going through the list of my mods last week and I realized it'll be close to 10k before I'm riding...and I haven't even addressed the front end issues.

your modifications are impressive

, ive learned a lot following the progess of your build

by cross
It's amazing how with even smallest upgrade like rear shock transforms this bikes behaviour, I love it

wyly wrote:I was originally only planning to spend 5k but going through the list of my mods last week and I realized it'll be close to 10k before I'm riding...and I haven't even addressed the front end issues.

Yes, between maintenance and mods I said goodbye to $10k a long time ago. It's taken about double that to get the bike to where it is now, but it's finally something I can really enjoy riding - and I'm happier with it than I would be with anything else I know of at a similar price point. The other bikes I considered before going with the CBX were:


ive learned a lot following the progess of your build.

by Syscrush
OK, there are some tweaks still left to do (I have new Dyna coils & wires here, and some braided wire covers on order, for example), and this was not a very thorough clean, but at least it's at a level now where I don't have to feel ashamed of it.

Here are some current pics and a bit of a summary of the mods that have been done. Click for full-size: 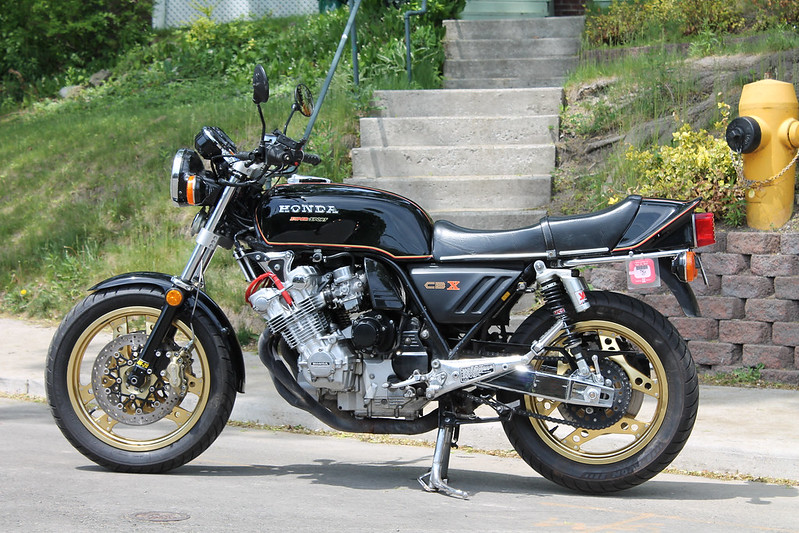 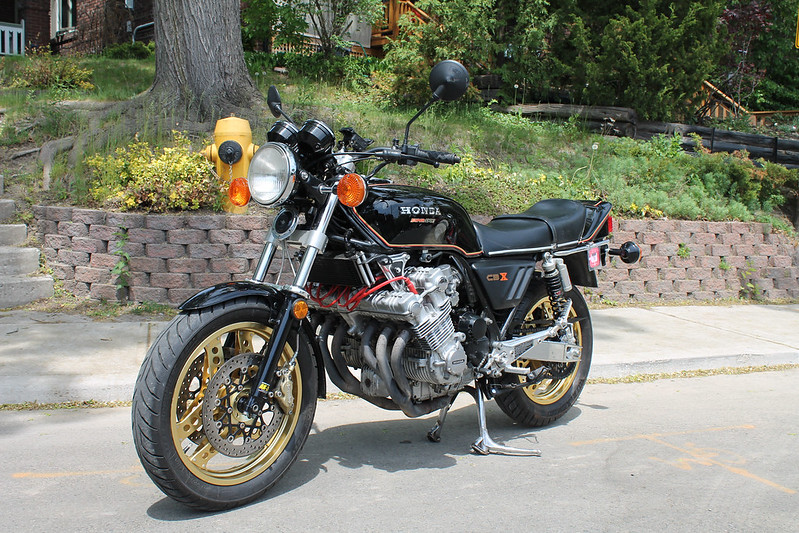 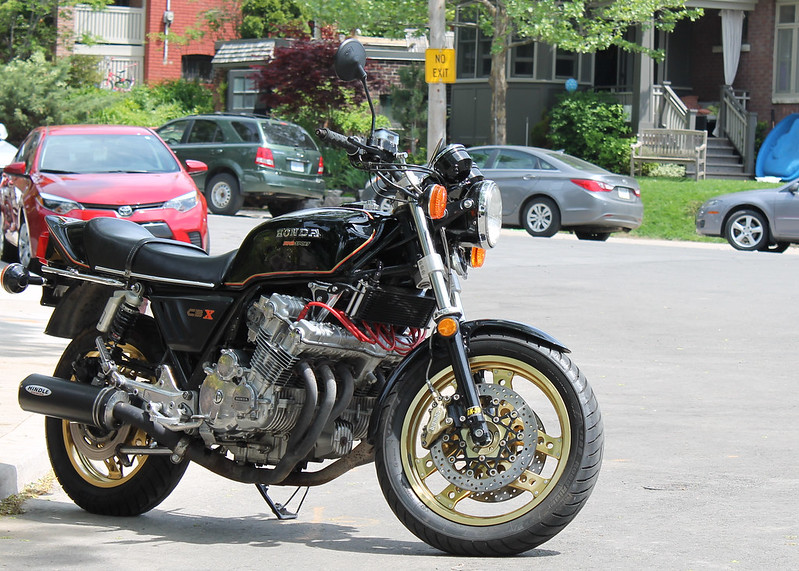 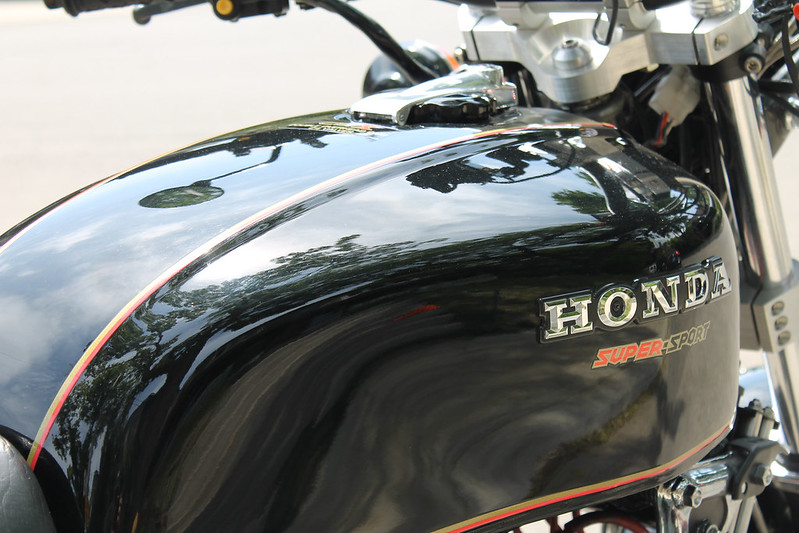 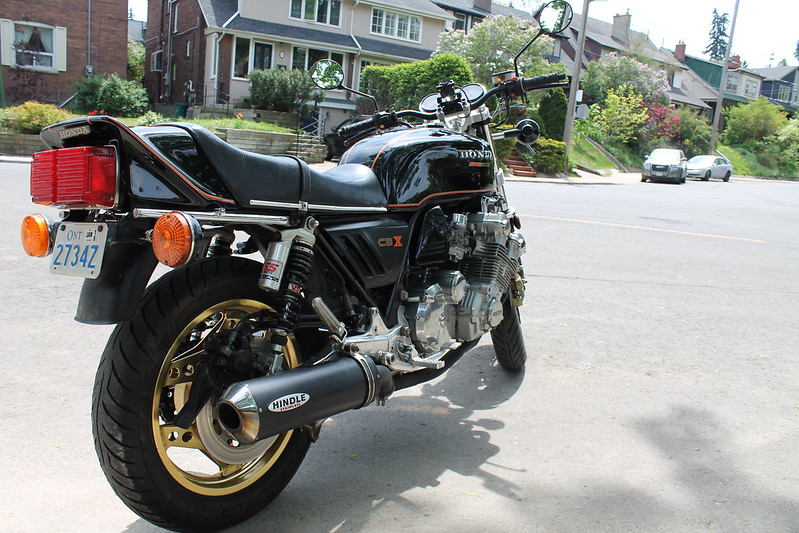 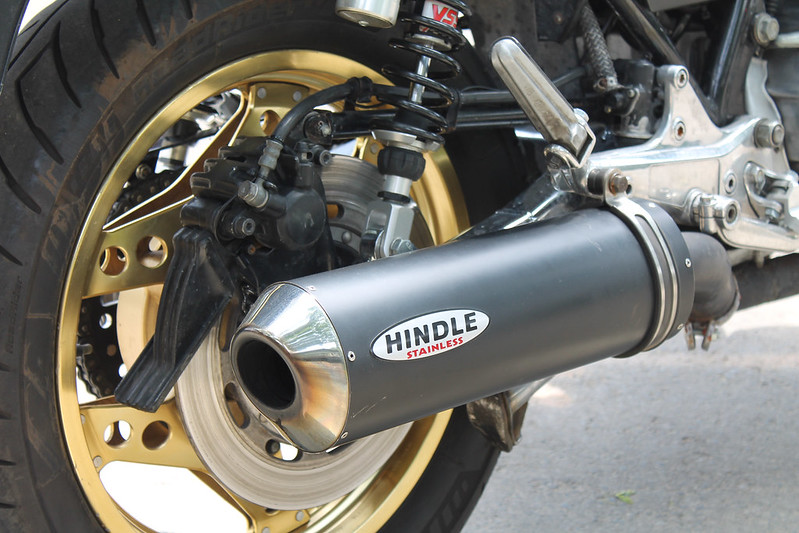 Hindle muffler on Gary Wolf 6-2-1 header. This muffler is the "Stealth" core with their dB killer insert and the Euro tip in stainless. 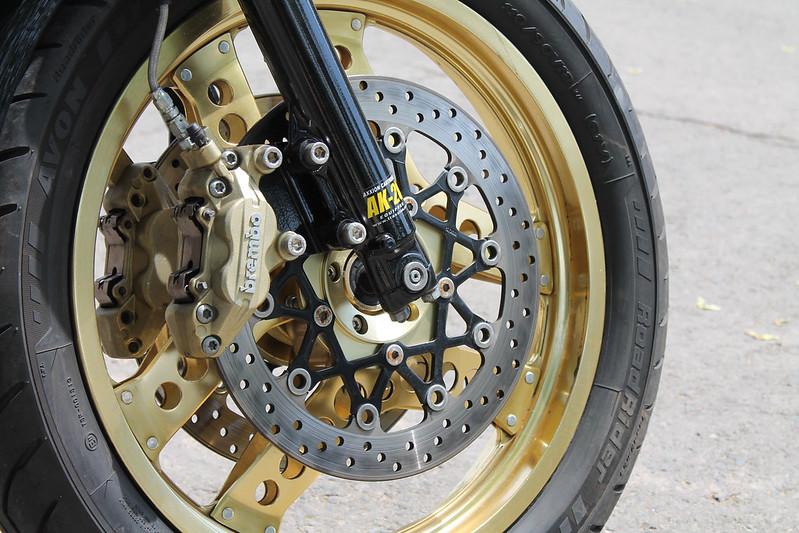 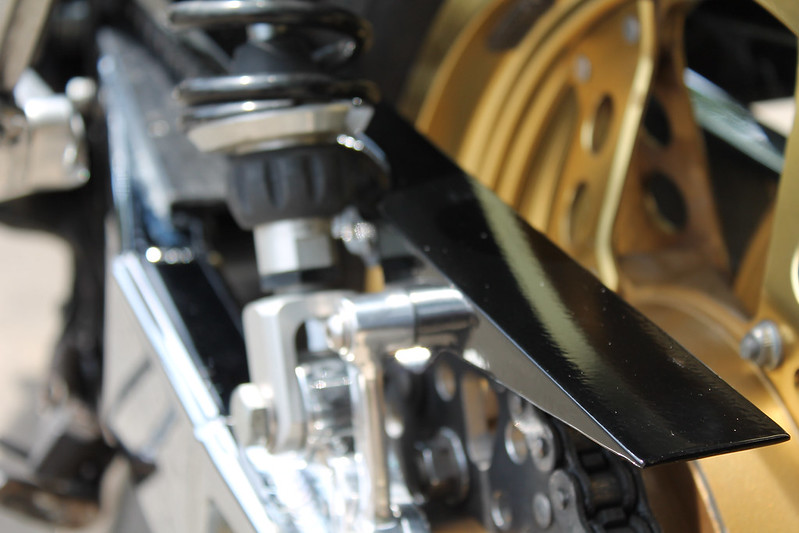 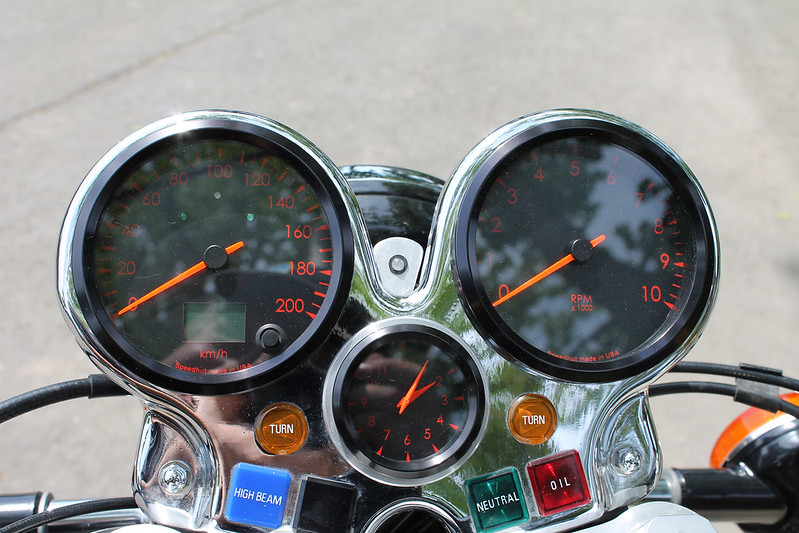 New SpeedHut electronic gauges designed to suit my needs and hopefully look like they belong on the bike. 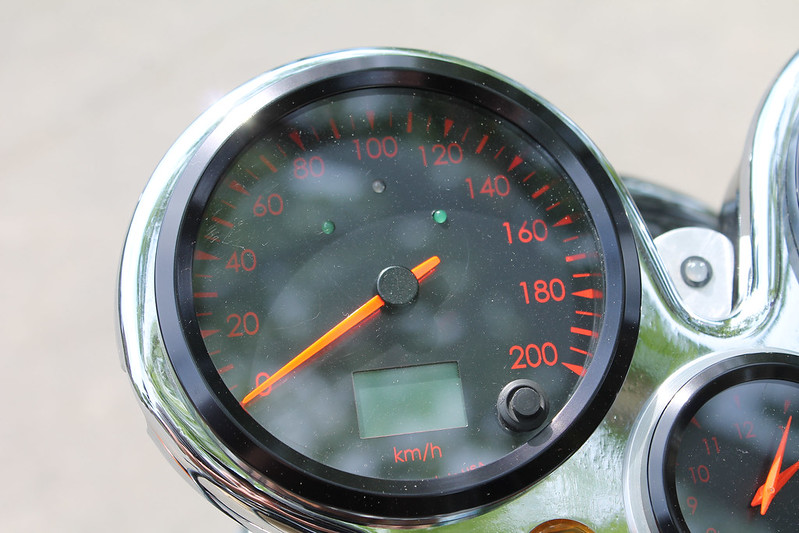 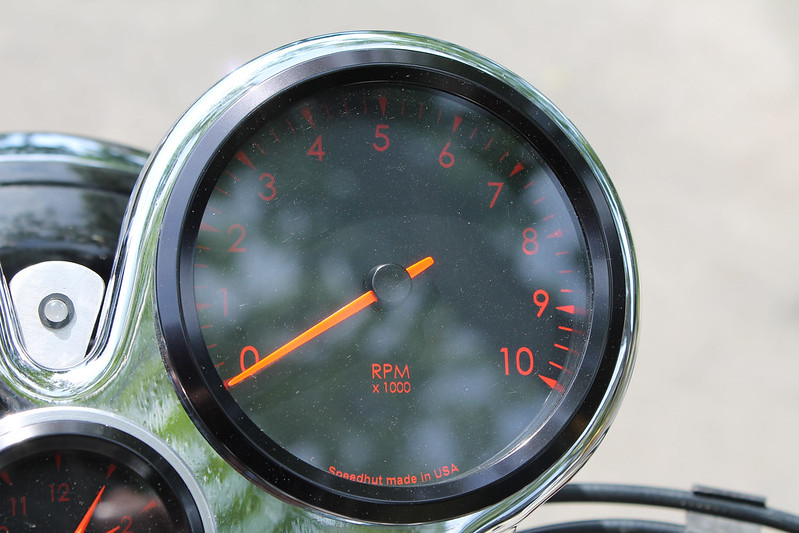 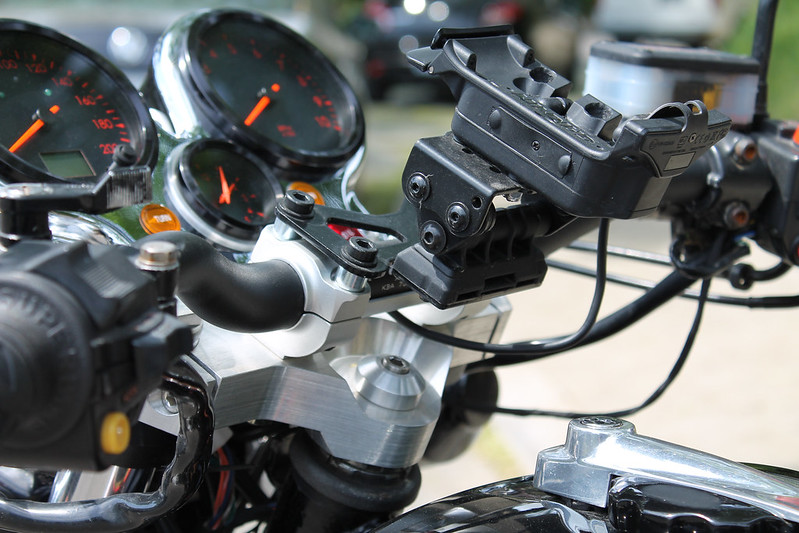 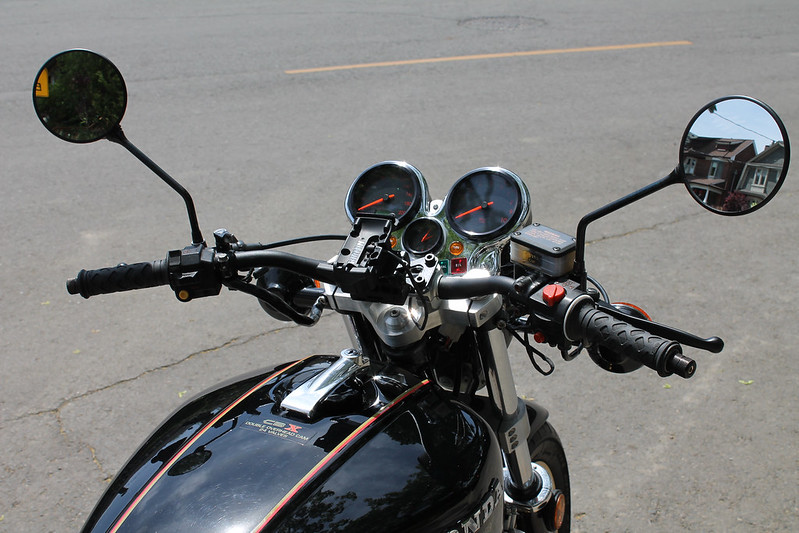 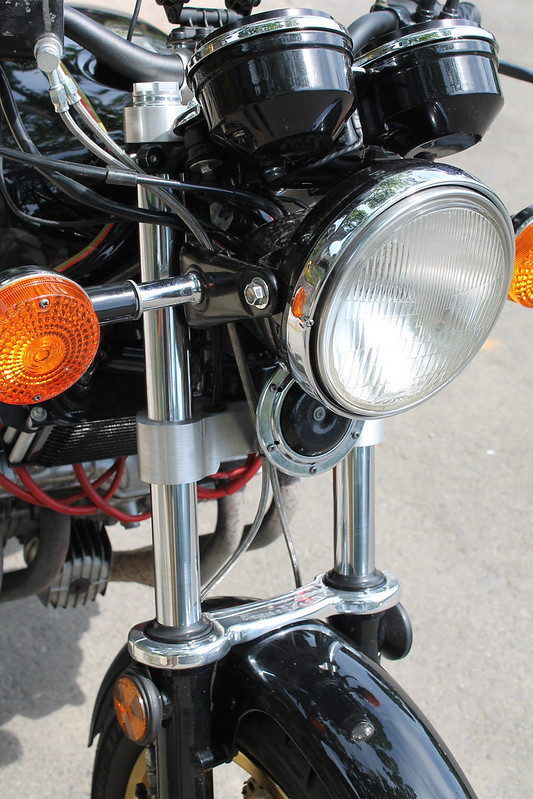 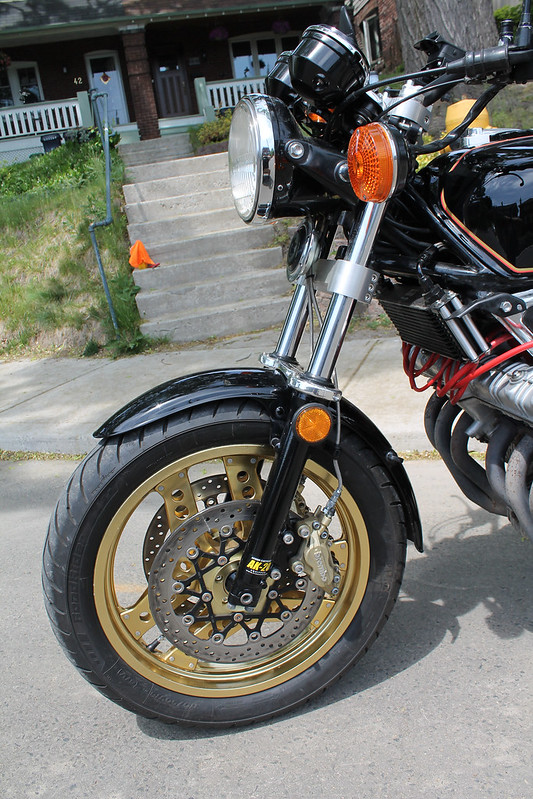 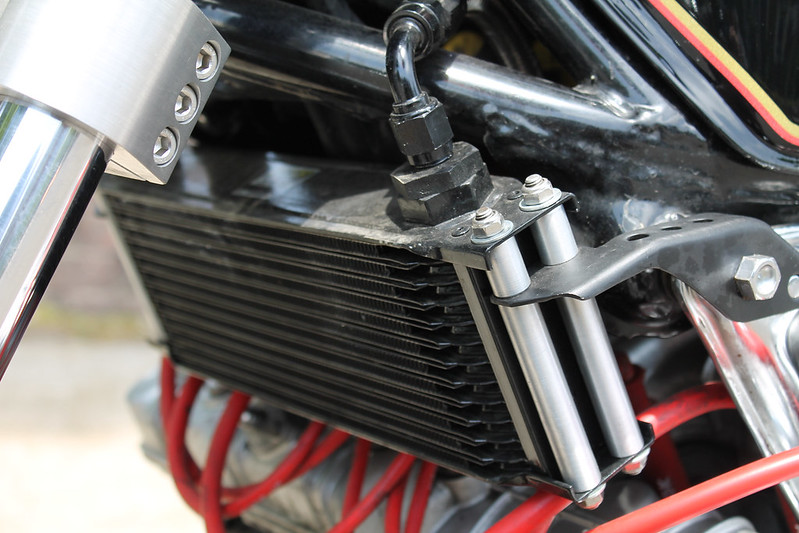 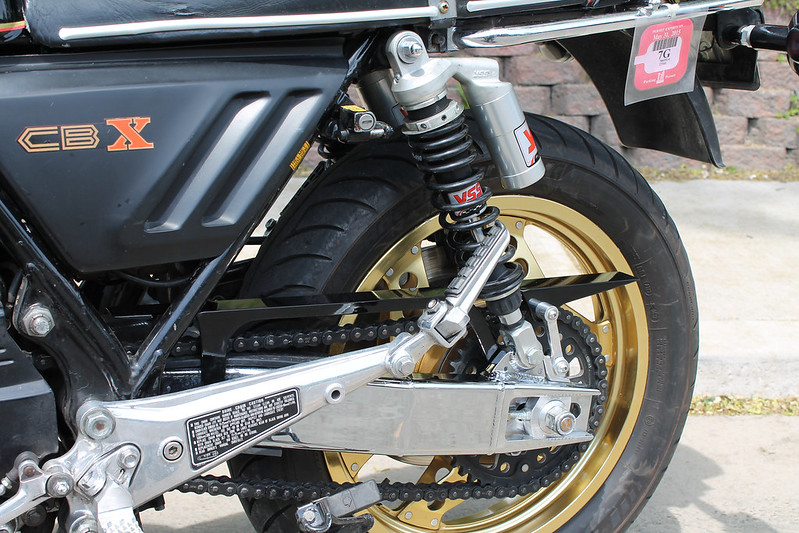 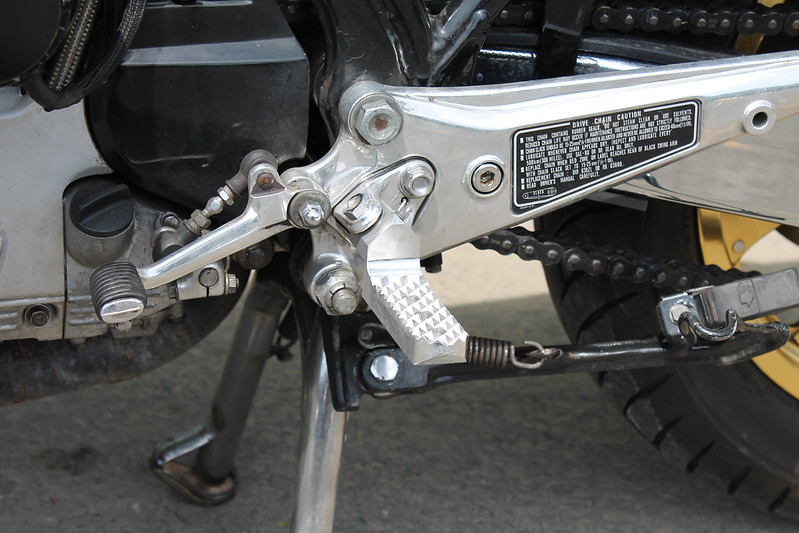 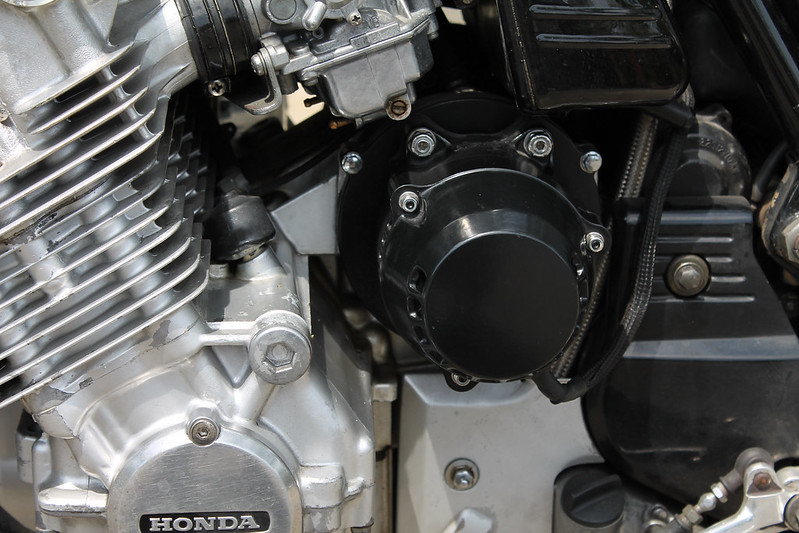 by steve murdoch icoa #5322
Great looking cockpit on your bike, Phil.
Bike sure looks clean to me.
.

steve murdoch icoa #5322 wrote:Great looking cockpit on your bike, Phil.
Bike sure looks clean to me.

Thanks Steve. I'm pretty happy with how the cockpit has worked out, although I do want to trim the bars down as much as possible - I think I can take about 0.75" off each end. I love the fat bar, custom triple, and keyless ignition - I think it all adds up to a look that's nice and modern without looking out of place on the bike. I was pretty unhappy about having to get rid of the stock gauges, but I've become very fond of the design I came up with via SpeedHut. I'm also glad that I went with the clock & the stealth voltmeter, it used to drive me batty not having any idea of the time while I was out riding.

Yesterday I hit a coin-op car wash to rinse the bike before giving it a wash, and had the following conversation with some guy there who saw the bike and wanted to talk about it:

by wyly
Yeah, l love the instrument cluster too. Out standing work overall.

by Syscrush
Now it's down to some comparatively little stuff (dialing in the suspension, dyno tune for the carbs, new coils & plug wires, ceramic coating the exhaust, upgrading brake pads) and just having fun on it.

I can't tell you how badly I wanna convert this thing to closed-loop EFI with a catalytic converter. Hopefully a good dyno tune will get it running (and cold-starting) well enough to put that out of my mind. But it looks like I'm gonna keep this thing long-term so in a way it would be stupid NOT to do it!