Dedicated to the enjoyment and preservation of the 6-Cylinder Honda CBX-1000 Motorcycle. Huge technical library!

Hey, what projects are you planning or preparing for? CBX, other motos, workshop, WHATEVAH!
Post Reply
138 posts

I purchased a pair of '79 Z's from a local CBX hoarder that insisted I'd need a parts bike (hereafter the "B Bike") to complement a fairly complete non-running "A Bike". 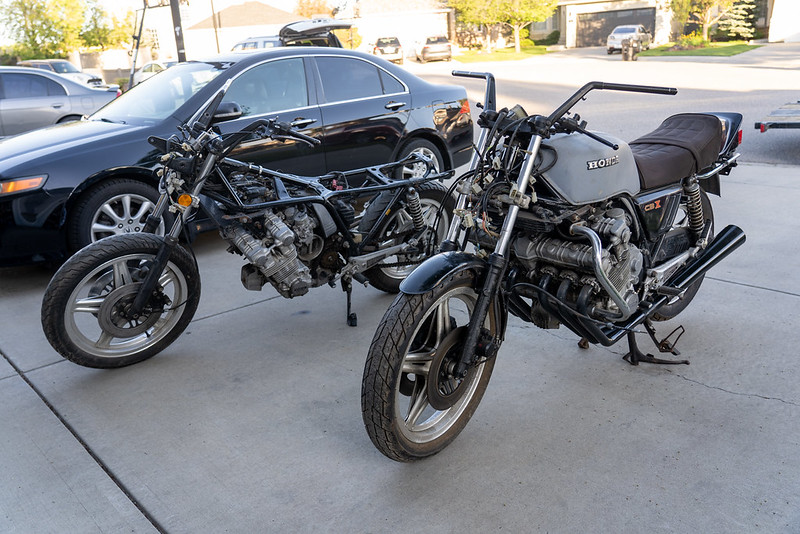 Curiously, the A Bike doesn't have a frame tag nor any frame number stampings. The PO provided the last provincial registration form (British Columbia) from 2000 that listed that frame number. Would suggest that at some point a factory fresh frame was provided and the owner/dealer neglected to stamp in the frame number on the replacement frame.

The engine/frame numbers for each bike seem to align with the number spacing that I've read on other posts on this forum so I'll assume the A Bike frame number is in order.

As mentioned, the A Bike is largely complete with an accompanying box that contained the authentic headlight and gauge cluster. The only bits missing are the turn signals. The engine spins freely with a wrench on the crank but probably hasn't run for 20 years.

The B Bike is basically the frame, suspension and engine c/w carb's & airbox but less starter, alternator and the battery carrier with regulator, igniters, etc. The engine spins freely but only for about 270 degrees to a solid stop. As such it has been a donor bike for some time, exactly how long unknown.

Initial plan is to strip apart the A Bike, make copious notes on the condition of all the bits and store in an organized fashion as to easily retrieve later as this project moves along. 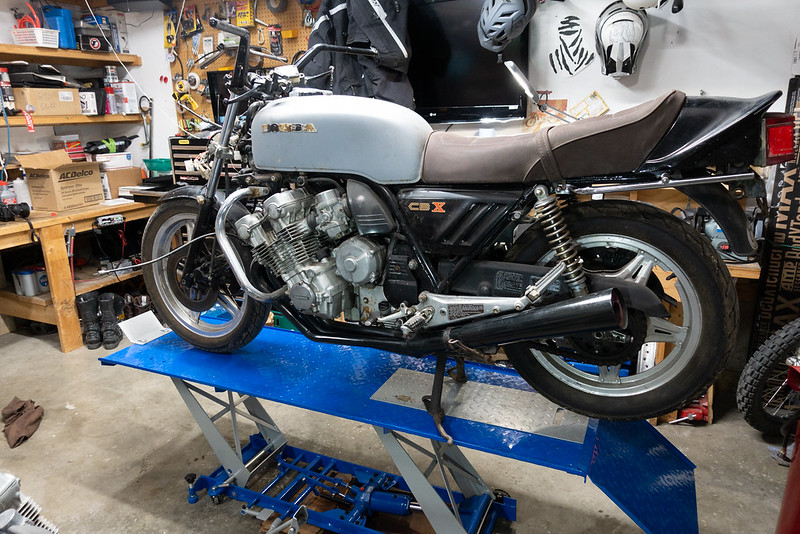 Prior to taking the engine out of the frame I followed the 'long sleeping' guidance offered by daves79x. I checked the valve clearances and rigged up some wiring to spin the engine to perform a dry compression test.

Everything under the valve covered looked real good - oil was clean enough and not milky, no rust or corrosion anywhere, the cam surfaces shinny with no scoring. 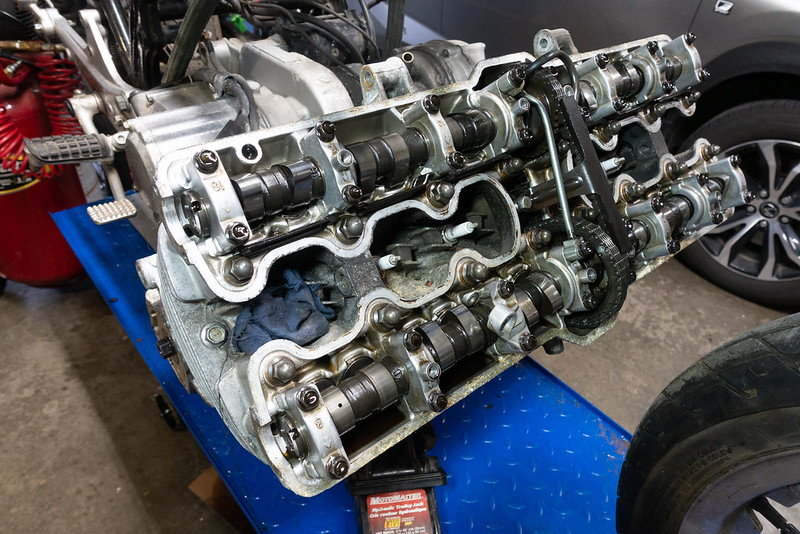 The starter spun the engine smartly and there was sufficient oil pressure to flip the oil pressure warning switch. The pressure would maintain for a number of seconds after the started stopped - all good signs. 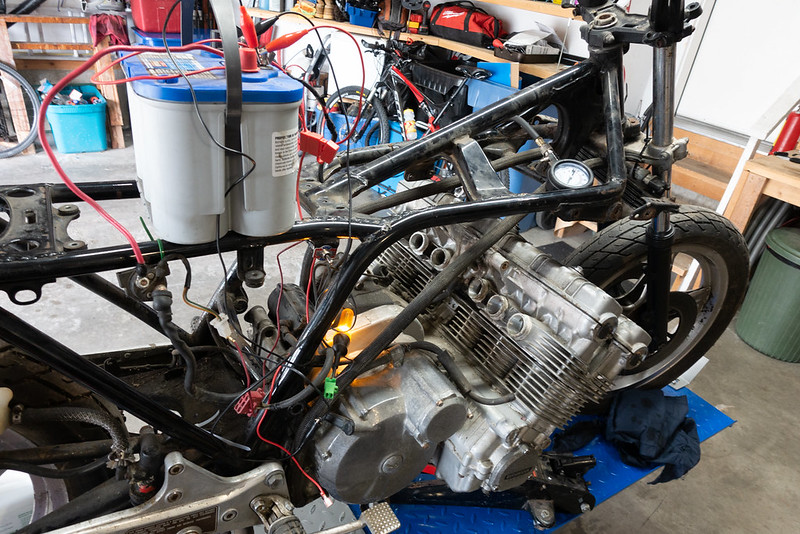 Below is the measured valve clearance and compression test. Only two valve clearances were tight, non excessive which I half expected being idle this long. The dry compression test indicates all the bits are there, working in the right order. I would have liked the compression to be over 100 psi in each cylinder but again, 'dry' test with an engine that hasn't moved the pistons in perhaps decades.

Drained the oil in both engines and removed from the frames. 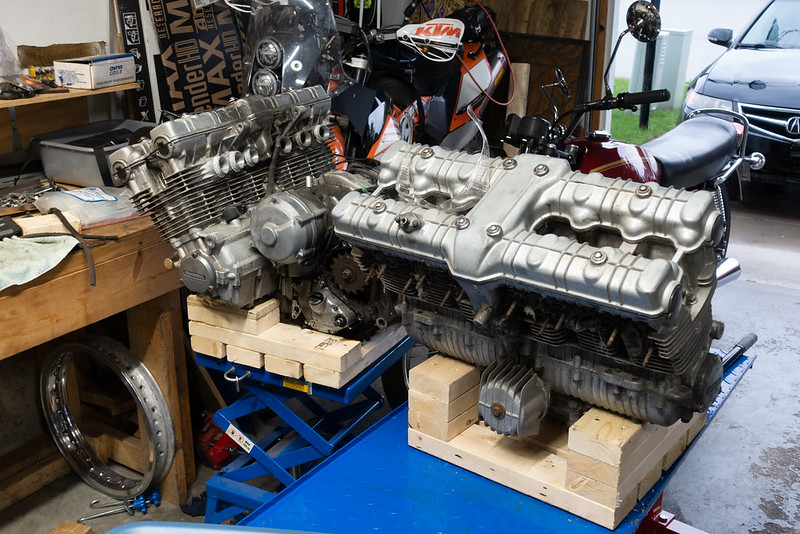 Things looked in order under the valve cover on the B Bike engine - nothing here was preventing the engine from spinning. 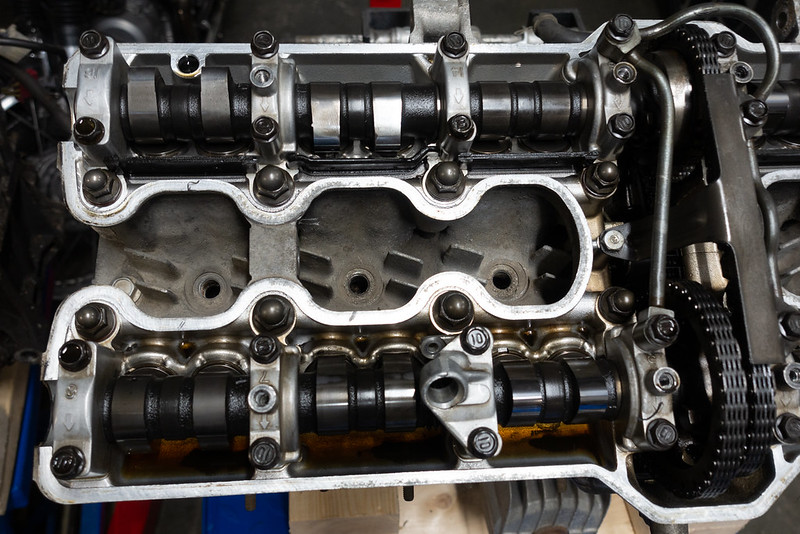 Taking the cams out was a bit tricky as I couldn't position the crank at TDC which positions the cam lobs off the valves. All the components looked fine, a few spot measurements showned nothing outside of the wear limits. 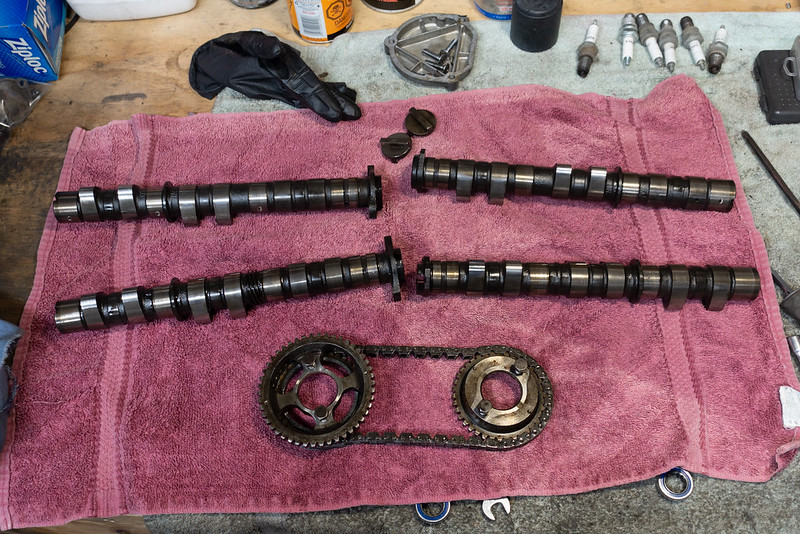 Removed the head and determined what was preventing the crank from rotating fully. The #6 cylinder was so severely corroded in the top 1/3 of the stoke that the piston wouldn't move. Somehow water must have entered the cylinder and created the mayhem. 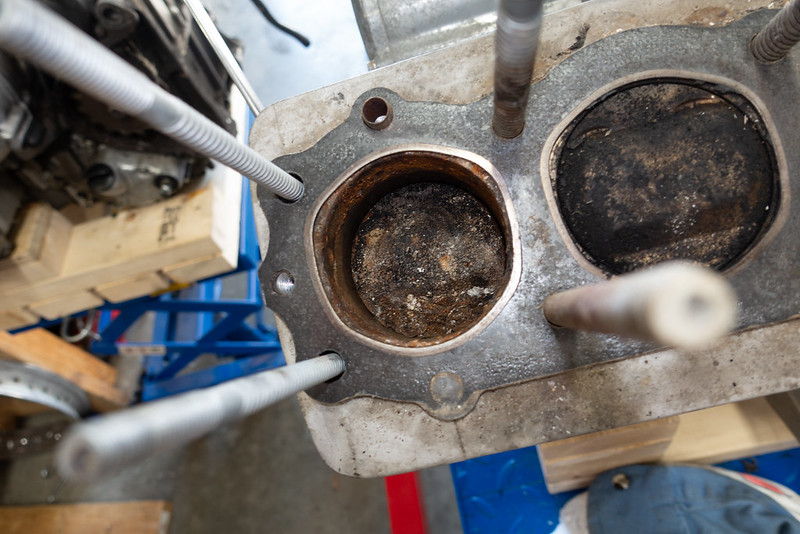 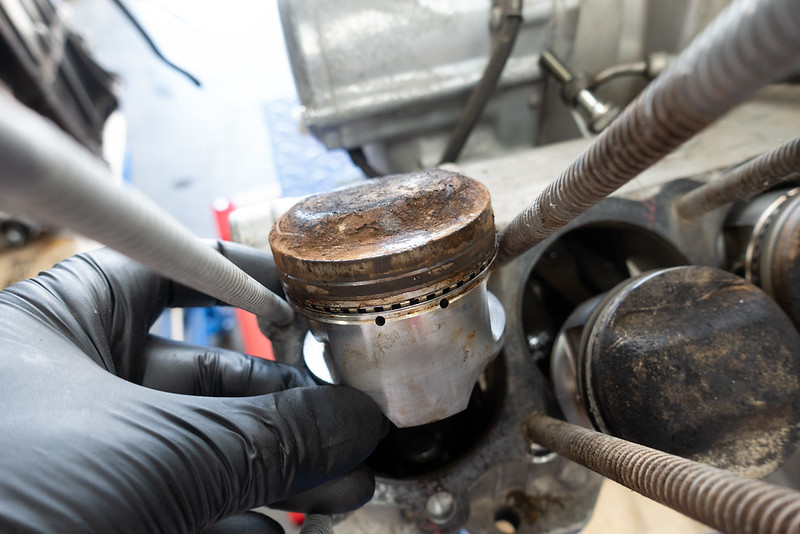 The balance of the cylinders and pistons looked OK but would need to be further measured and assessed. 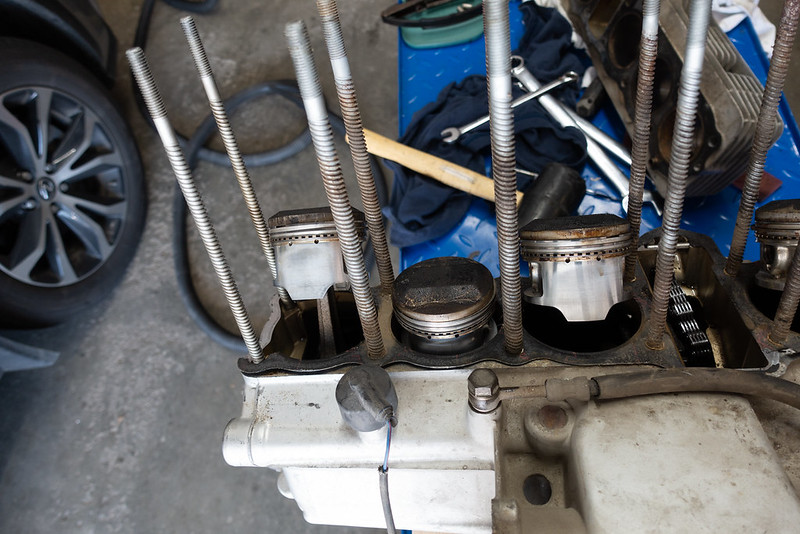 None of this explained why the bike may have been abandoned, put out to pasture only to have water find it's way into cylinder #6....

I believe this is the smoking gun... When I took the vertical cam chain tensioner out of the engine block I noticed the spring was just hanging by the bracket, not attached at one end. This is why - the spring had worn through the bracket on one side. This would effectively have made the tensioner worthless, unable to apply more tension when the user loosened the tension nut per the maintenance instructions. I've never owned a CBX before but I suspect the floppy timing chain would have created enough noise that the owner sidelined the bike until someone looked at it but never got around to it - until now. I'd welcome your insight on my hypothesis!!

Is this a common issue for these tensioners?? 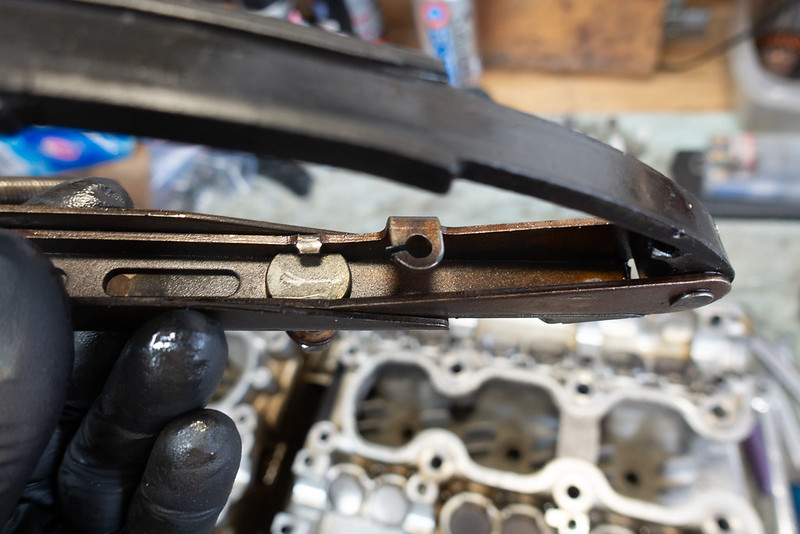 The balance of the tensioner doesn't look to good either. 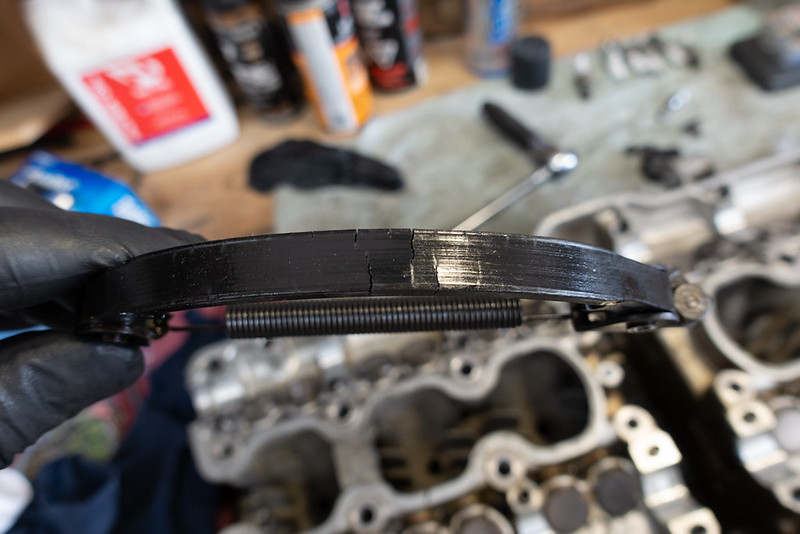 Availability, cost and quality have led to an aftermarket set being produced,
viewtopic.php?f=25&t=10890
Top

Great start, will enjoy this, help where I can.

Started to disassemble the 'A' bike engine this past week, the engine I did the compression test earlier. Everything is looking good, would appear this engine doesn't have too many miles on it (recall the uncertainty of the actual mileage). The timing chain tensions are in very good condition, only very slight cracks on the long chain tensioner. Plastigauged the cam journals - all well inside the service limit. Quick check of piston diameters and ring gap on one piston - again, all within service limits but will need a more thorough check on all piston/cylinders. Some of the exhaust valves (3 or 4) look to have some pitting that may need to get replaced, the rest looked fine but the mechanic doing my head work will make the go, no go call. 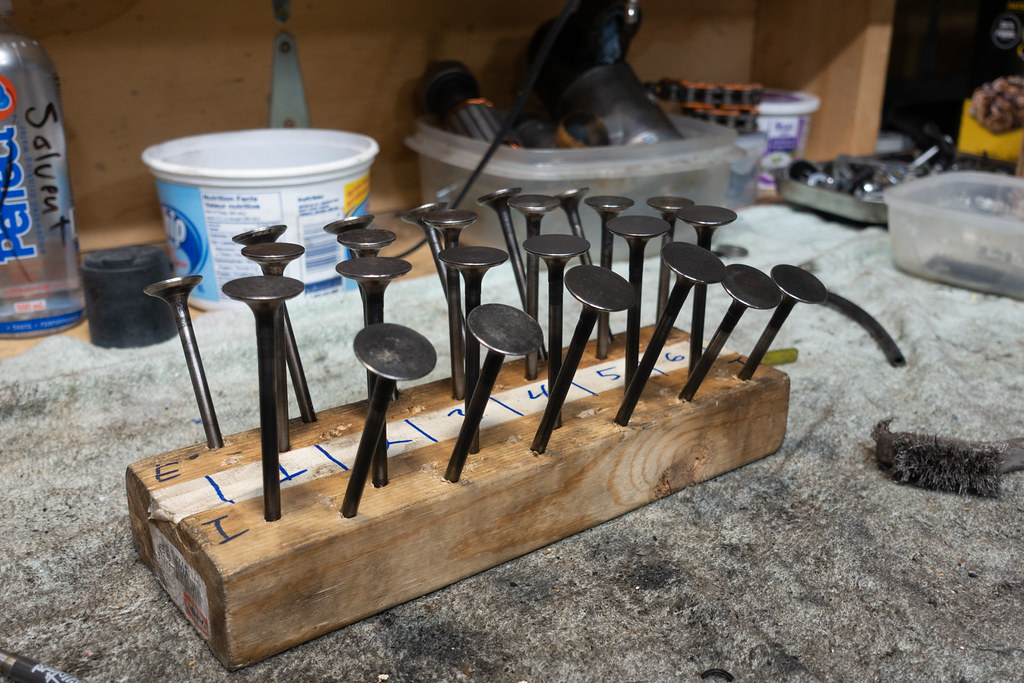 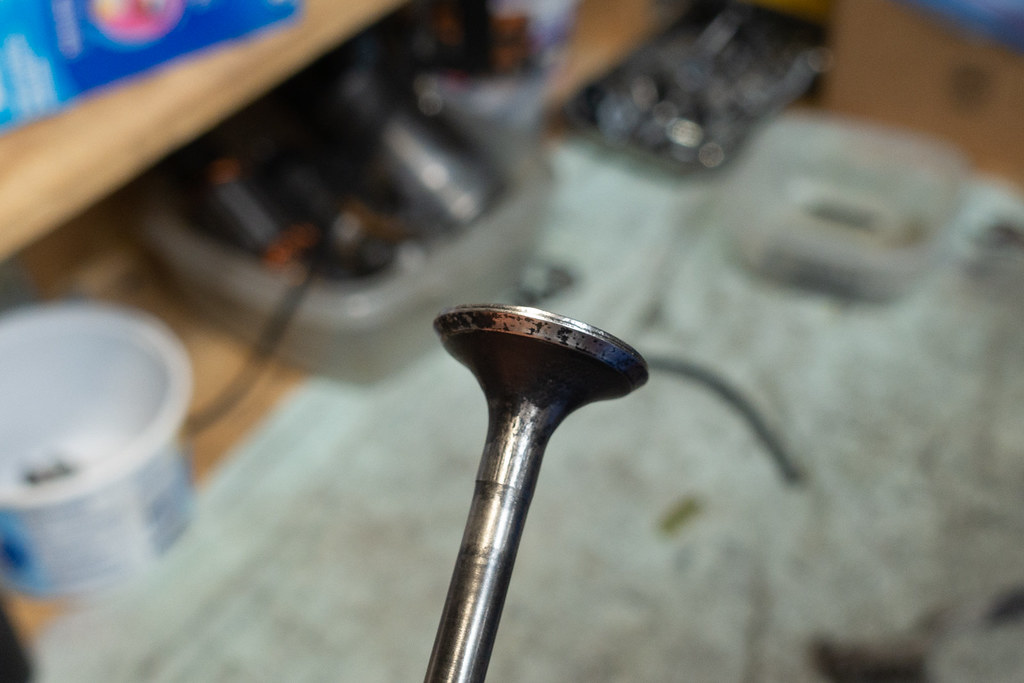 I need to sort out what I'm going to do to re-finish the outside of the engine. I'm having the head and cylinder castings vapor blasted to give it that satin smooth aluminum finish. Same for the side clutch, alternator, crank and timing covers. I'm not sure what to do with the engine case. Plan on splitting the cases to measure the rod and crank clearances so I could have those vapor blasted. You can see by the pic below that the front side of the cases has exposed aluminum that has corroded. The back/sides of the cases have most of the original paint still clinging on.

I'm thinking of stripping the cases with a paint remover and having them vapor blasted. If they look good enough maybe apply a clear coat that has been recommended on a few threads. Otherwise I'll paint after the vapor blasting. Any suggestions / guidance will be appreciated! 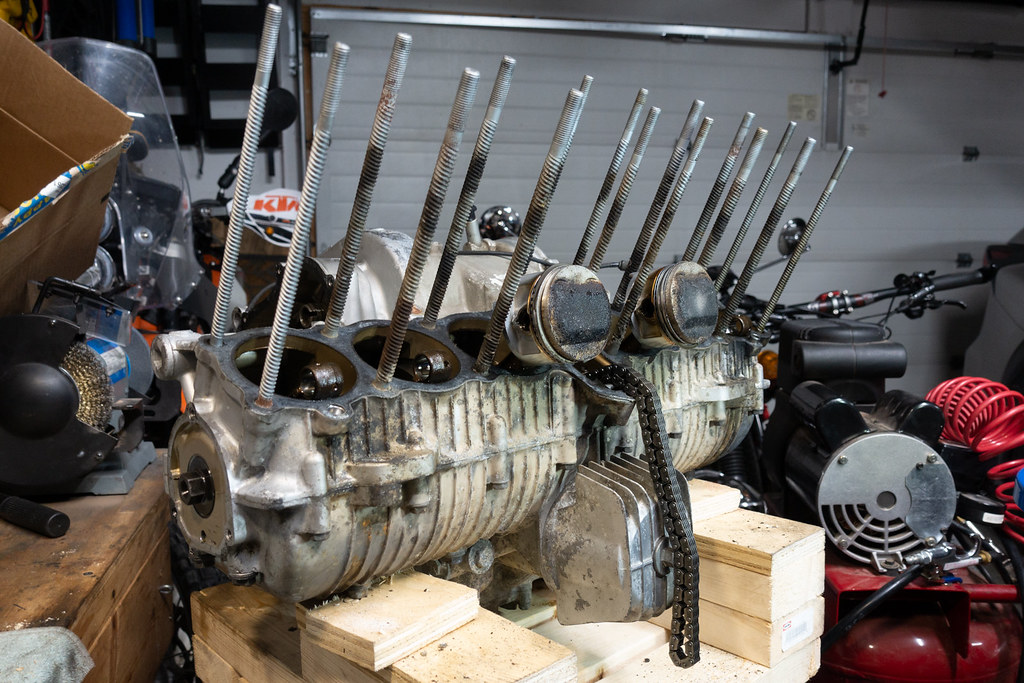 You should consider Nils from this site for vapour blasting.
viewtopic.php?f=5&t=9881
Top

However you clean the cases, do yourself a big favor and paint them. No better time than now to properly prep each part and paint them before reassembly. there are some favorite paints guys have used, a search will bring up those threads.

I used Dupli-Color for engine paint, Silver Met CBGM0535 is a good match. I picked it up from Auto Value, there should a few in your end of the city.

Vapour blasting- Nils has an excellent reputation but you'll need to factor in shipping costs. Locally I'd go see Phil at the Old Motorcycle Shop, they've done some excellent total restorations, if he doesn't do blasting in house he'll know where to go.
CBX a work in progress, still improving...GS1150EFE completed and awaiting modifications.....RD350, remnants in boxes scattered throughout the garage
Top

wyly wrote: ↑
Tue Jun 30, 2020 11:24 am
Vapour blasting- Nils has an excellent reputation but you'll need to factor in shipping costs. Locally I'd go see Phil at the Old Motorcycle Shop, they've done some excellent total restorations, if he doesn't do blasting in house he'll know where to go.

I'd like to give Nils the business but the shipping $ and customs paperwork would make it impractical.

wyly wrote: ↑
Tue Jun 30, 2020 11:24 am
Vapour blasting- Nils has an excellent reputation but you'll need to factor in shipping costs. Locally I'd go see Phil at the Old Motorcycle Shop, they've done some excellent total restorations, if he doesn't do blasting in house he'll know where to go.

I'd like to give Nils the business but the shipping $ and customs paperwork would make it impractical.

If I stripped and vapor blasted the cases, could I not leave them 'naked' and treat them with an anti-corrosion like ACF-50??

paint would be my choice but it's your bike.

I discovered an amazing product used by machine shops and the auto restoration modification guys, Gibbs. For my GSX project I wanted a polished metal tank and I initially planned to clear coat it to prevent corrosion so I was buying some clearcoat at a custom auto shop and the guy said their best product was Gibbs. It has a number of uses besides preventing metal oxidation and even claims that you can paint over it.

I gave it a try and it's worked as claimed, people are disbelieving when I tell them I haven't clear coated my tank. Recoating only takes a small amount on a rag, which I do after a quick polish to remove any light scratches the tank may have picked up.

I found it at Classic Performance, it's in the NE.
CBX a work in progress, still improving...GS1150EFE completed and awaiting modifications.....RD350, remnants in boxes scattered throughout the garage
Top

Built this contraption to hold the engine upside down to split the cases. 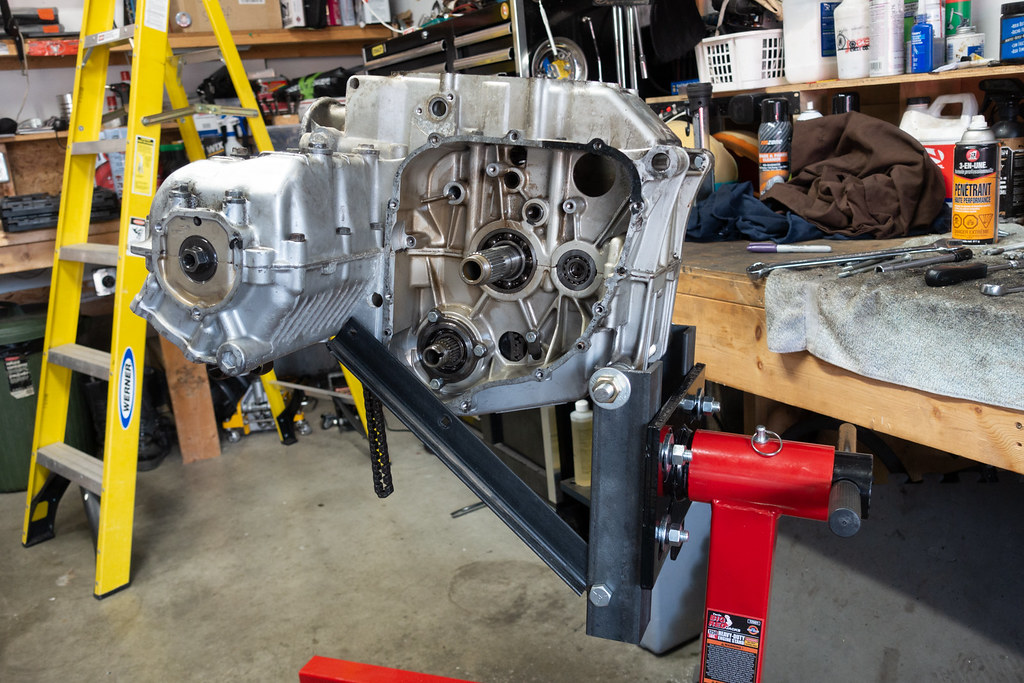 Extra piston pin clip that was hiding at the bottom of the case in one of the crevasses. Probably from the factory assembly as the pistons are standard size and have 'art' in the castings. 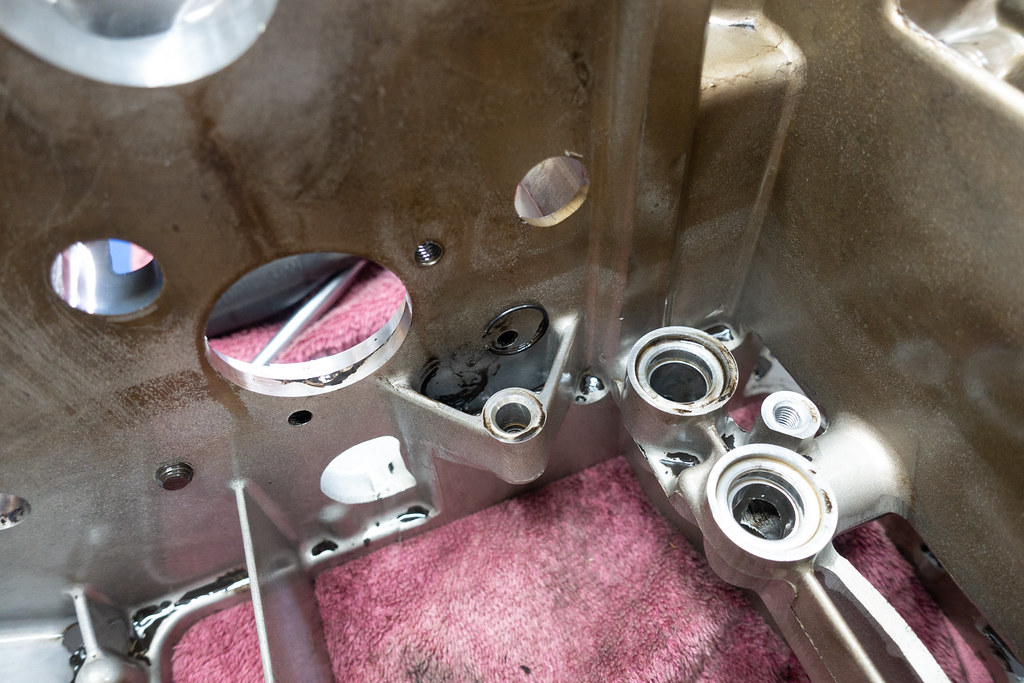 From my eyes, everything inside the cases is in fine shape, very clean, no obvious wear. Crank bearing surfaces are smooth, no scoring. 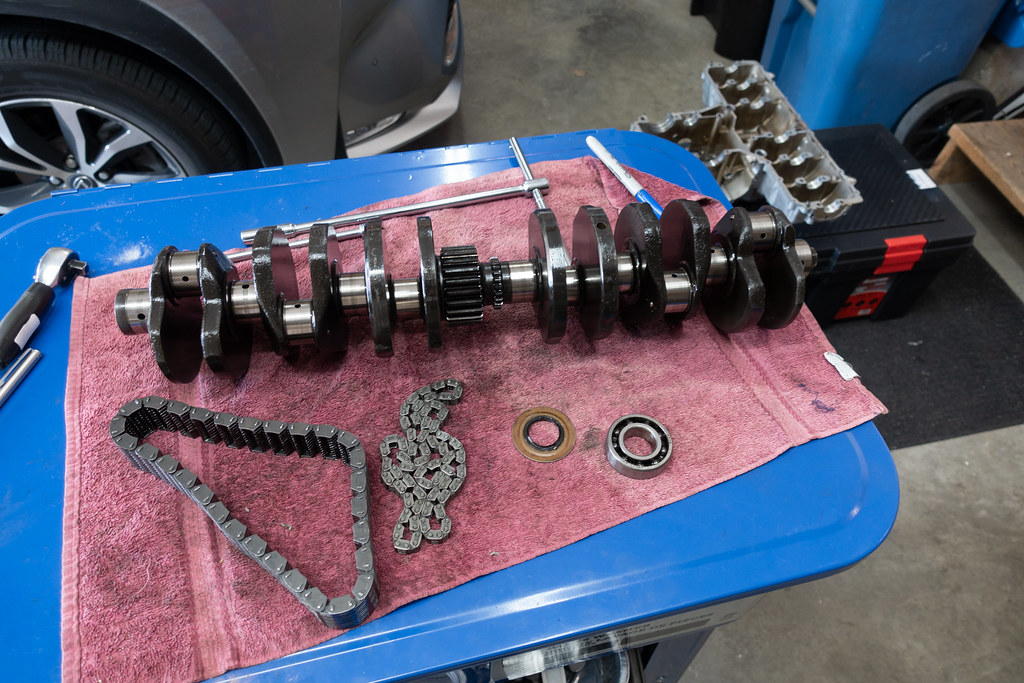 I don't know the mileage that was on this engine as the gauge cluster the PO supplied was shipped loose and is probably from a different bike. The valve clearances were almost all within spec and the valve shims are all in the 2.90 to 3.05 mm range which I believe suggests there wasn't any valve/head work done. The cam chain tensioners are all in good shape, minimal cracking, no grooving. I plasi-gauged all the crank bearings - all within spec (~0.05 mm), checked the big end bearing on rod #1, again within spec.

Questions for those knowledgeable:

1) I can't check the primary chain stretch as I would need a 2nd driven sprocket to measure the distance. I haven't taken apart the 'b' engine to have a 2nd one to measure. I suspect it will be within spec but wonder if I should invest in a new primary chain regardless. Same for the cam chains.

2) Assuming that since I have the engine apart I should change the con rod bearings and crankshaft shells at this time, even though they are well within spec. 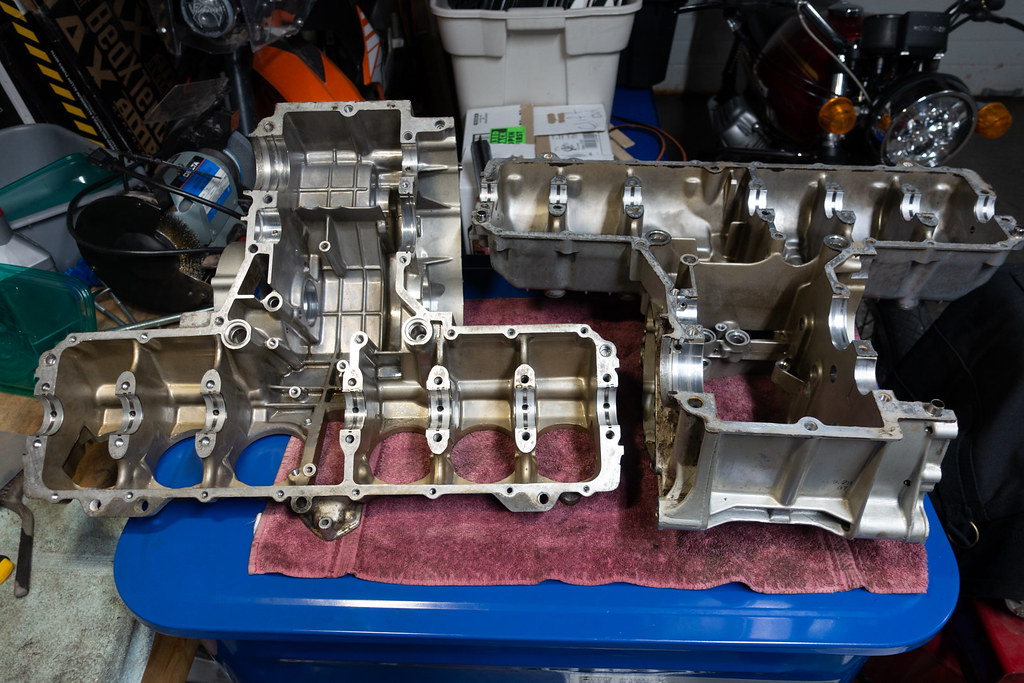 I wouldn't change bearings if they measure good. Your call on the chains, if the tensioners don't have severe cracking or chunks gone, you can re-use them with confidence. If this bike's intended use is a couple of thousand miles per year, it will last forever.

This may be a stupid question, but it looks like your engine stand - like the ones I have - is designed to have the engine rotated once mounted. You would not have to build an elaborate bracket to mount it upside down....????
To be understood is the exception
To be misunderstood is the rule.
Top
Post Reply
138 posts